A Vision of Gaudi’s Sagrada Familia

The December issue of National Geographic magazine features an eight-panel, three-fold, tear-out poster of the master’s cathedral as it will appear once construction is completed in 2026.

Gaudi himself started on the structure devoted to the life of Christ in 1883, living on site for the last year of his life before he died in 1926.  Construction has ebbed and flowed over the years, dependent on donations from private sources.

The graphic accompanies a feature by Jeremy Berlin titled “Gaudi’s Masterpiece.”  It’s the only visualized union of the building’s interior and exterior, and a visual explanation of the architect’s style, divided into structural features on one side and ornament on the other.

National Geographic Deputy Art Director Kaitlin Yarnall and Senior Graphics Editor Fernando Baptista collaborated on the poster, spending a week in Barcelona with the architects currently working to finish it.

“We got up on the roof to see it,” Kaitlin said.  “Then we went down to the basement to the model room where the architects were putting it all together right in front of us.  It was like a dig, climbing around down there among all the models.”

The cathedral consists of three facades dedicated to the Nativity, the Passion and the Glory.  Eventually, 18 towers will be dedicated to Jesus, Mary, the 12 apostles and four evangelists.

“Eight towers are finished, and there are ten more to be built,” said Fernando, a native of Spain.  “The last will be the biggest.”

The pair took thousands of photographs and then jig-sawed them all together over a three-month period to develop the poster back in the states.

Fernando used a synthesized process of pencil drawings, Adobe Illustrator, watercolors and Photoshop for the finished product.  “It was fine art and computers mingled together,” he said.  “I used a computer for a grid and perspective, then printed it out and used watercolor for shading, then scanned it back in to put textures on the stones.”

Their work, a mini-masterpiece in and of itself, carefully indicates the structure as it stands today, with shaded areas showing how it will look once complete.

“We were trying to keep the scale of the building intact, to bring readers closer to it so they can understand it,” Kaitlin said.

One can’t help but believe that Gaudi himself would be pleased.

For more on Gaudi, go to http://ngm.nationalgeographic.com/2010/12/big-idea/gaudi-text

Photos and graphics are featured in the December issue of National Geographic magazine, on newsstands November 30. 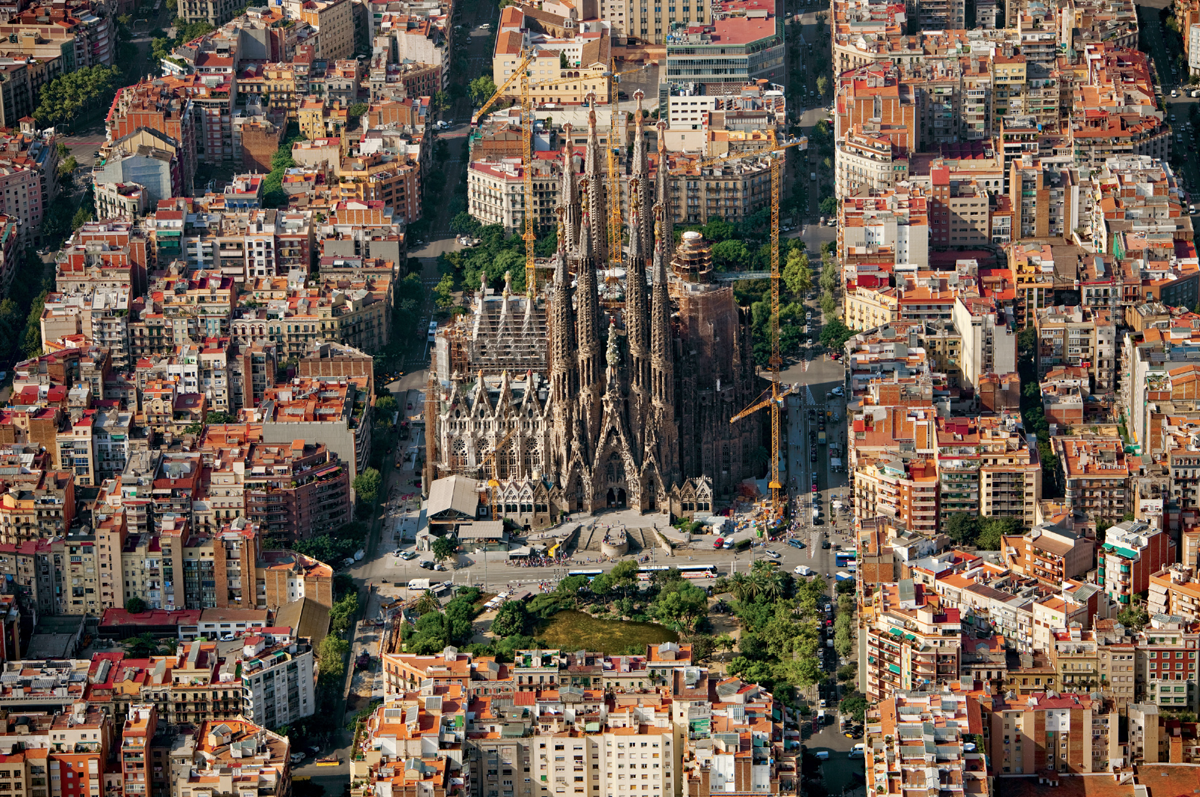 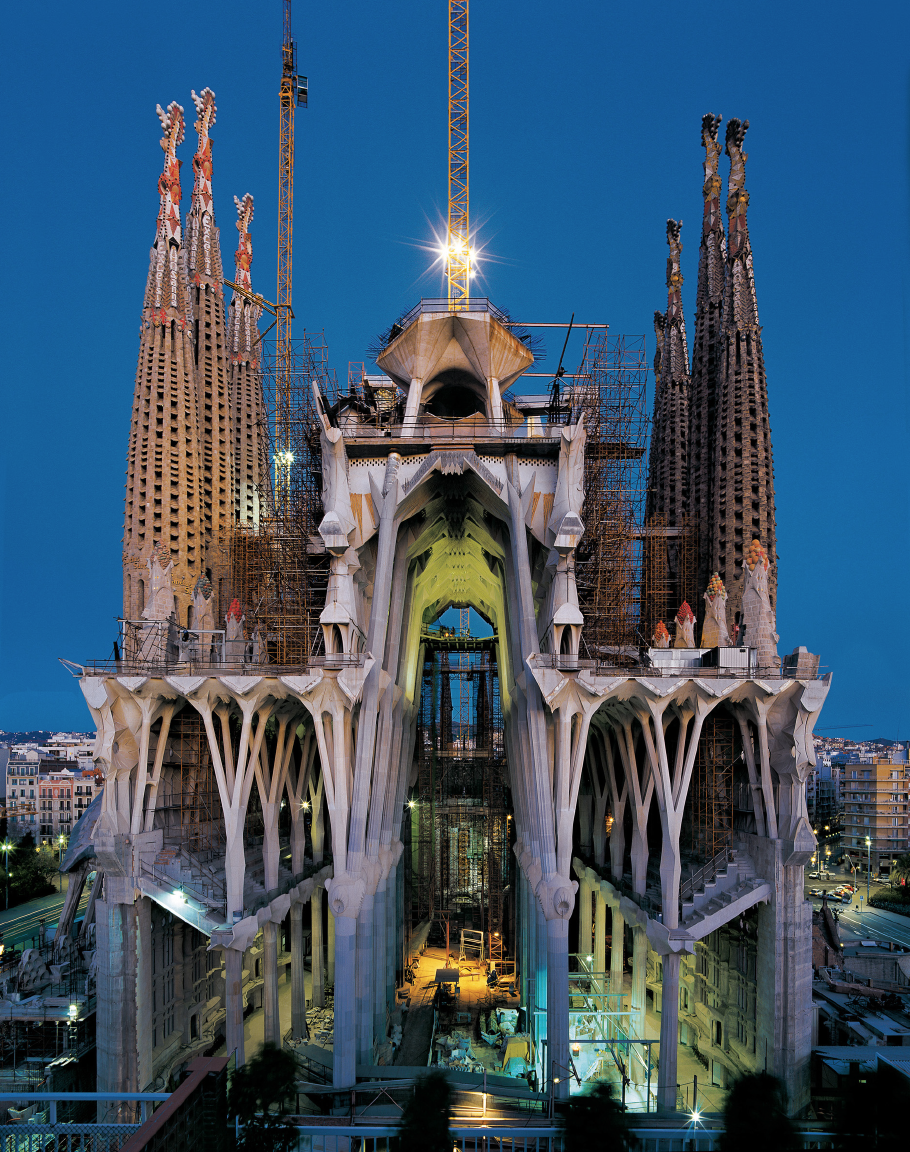 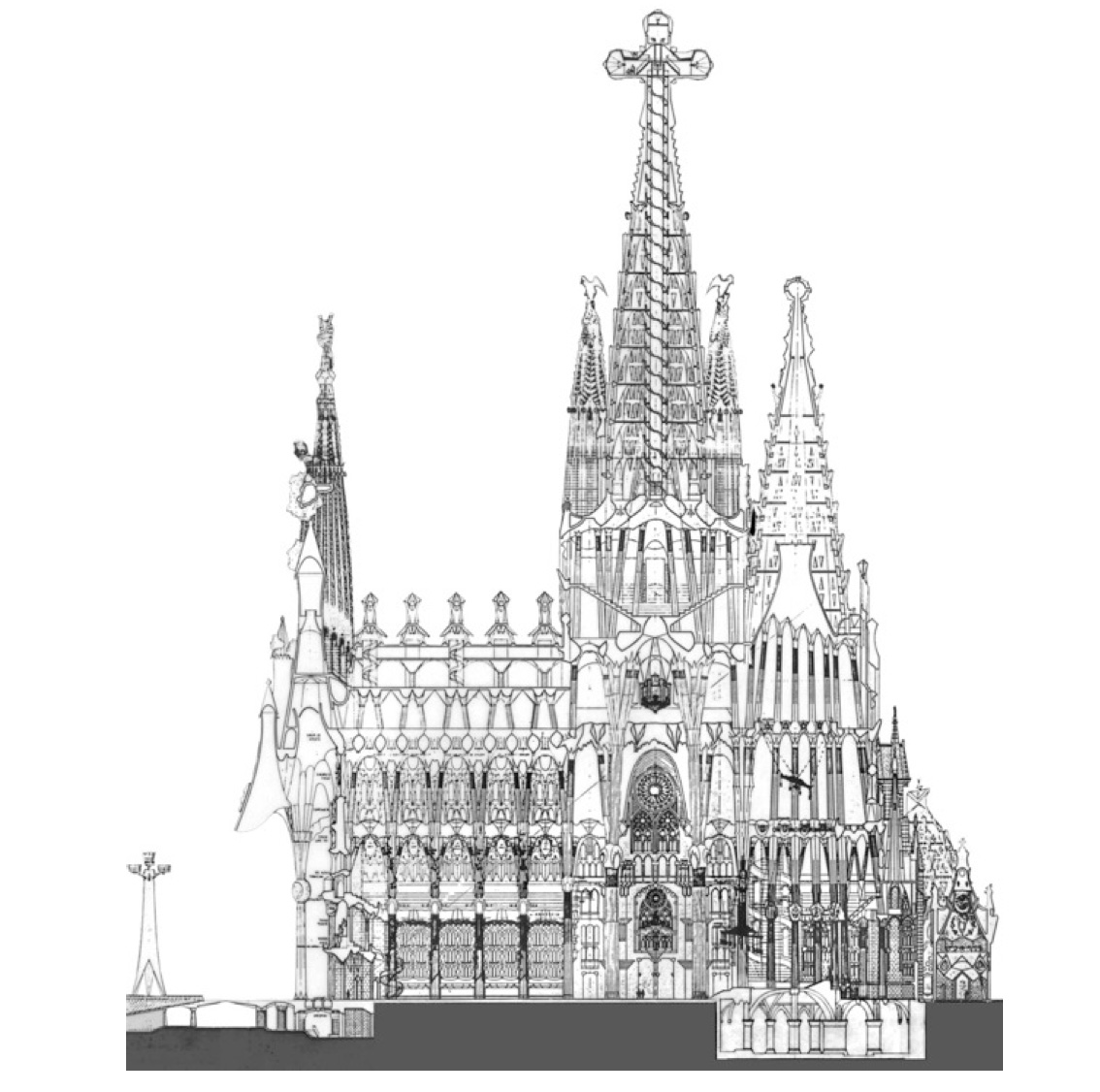 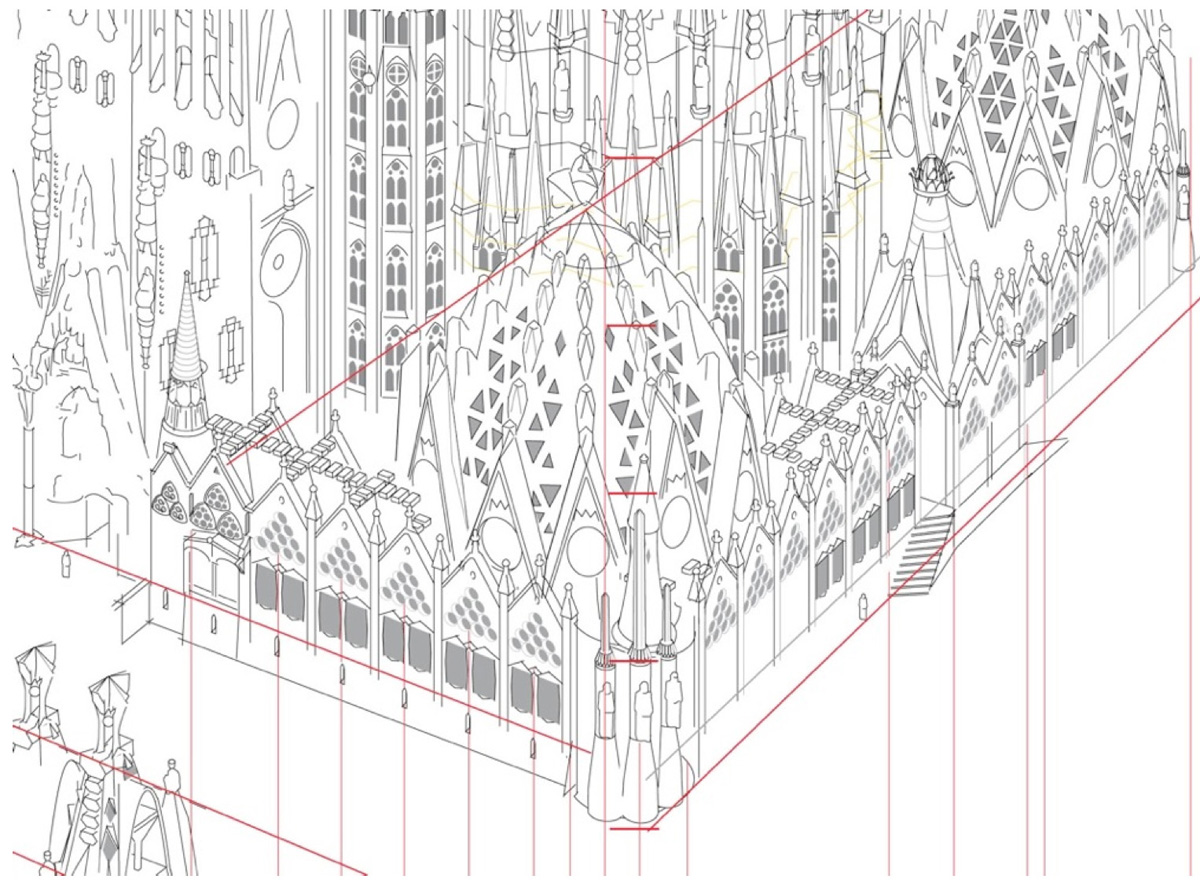 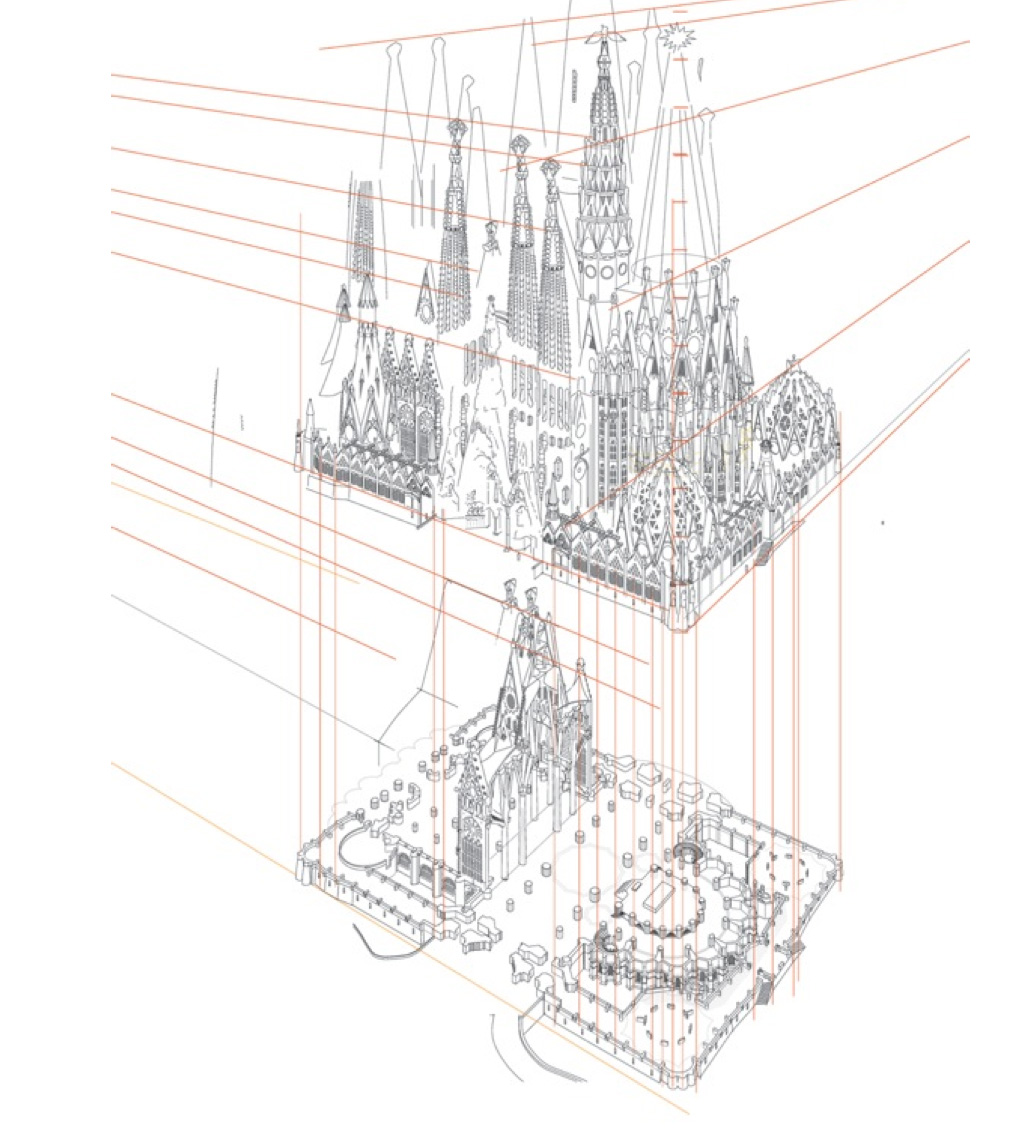 This will be an extraordinary place when complete; in fact it is already amazing.

Unfortunately, the original, fluid quality of the stone carving and the original realist style of the sculptures have both been abandoned for a semi-modern, angular shapes. The new, clumsy figures look a bit like Darth Vader, under the direction of a local sculptor who was put in charge of the completion. He also has made the architectural members angular and they seem more precast than carved like the originals. It is all strikingly different.

Nonetheless, the catenary curves survive in the basic structural shapes and that alone is worth a visit.

When he hasn’t been building architectural models for Centerbrook Architects during the past nine months, Patrick McCauley...