A Vanishing Oasis at City’s Edge

An 11-acre, Taliesin-like landmark in Raleigh N.C. is about to be transformed into low-income housing.

Landscape architect Dick Bell’s Water Garden was conceived in the mid-‘50s as a Shangri-La for the creative community in central North Carolina.

It was decades ahead of its time.

The well-known landscape architect developed it as the city’s first mixed-use development for artists and designers in 1955, though he wouldn’t actually complete it for 14 years.  It was to be his home, his business and his landscape laboratory.  It also served as studio and gallery for those in need.

“Water Garden was an ace in the hole,” Dick said. “It was an epistle of site plan and architecture.”

It served as the cultural arts center of Raleigh for years.  Dick filled his office with interns, architects and design professionals, while his wife, Mary Jo, filled the Garden Gallery with artists, writers and musicians.

“It was an oasis at the edge of the city,” said Thomas Crowder, current president of Architektur.  In the mid-‘80s, he worked for Bartholomew & Associates, a firm that rented space at Water Garden.  “It was a collaborative environment. You’d take a break from work and get into conversation with design professionals, artists, or landscape architects.”

Dick’s goal was to create a hub of artistic ingenuity and a case study for working with the land, integrating buildings and preserving nature, all while surrounded by a dense and tranquil forest.  Over time though, as car dealerships and commercial interests began to dominate the area, its land grew more valuable than his buildings.

Unable to maintain the property or find an acceptable scheme for saving it, Dick sold Water Garden in 2007, then moved to Atlantic Beach.  In spring of 2011, the complex of buildings is to be torn down to make way for Water Garden Village, a low-income housing project for families, and Water Garden Park, a senior living center.  Most of its trees will remain on site.

Dick seems at peace with its new status.  “I think it’s admirably suited if it’s low-income,” he told the Raleigh News & Observer in August.  “Maybe I’ll move into one myself.”

He may have given up his Taliesin, but he’s held onto his sense of humor.

For more on Dick Bell, go to http://dickbell.wordpress.com/ 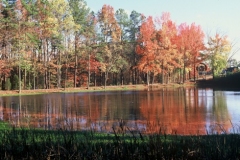 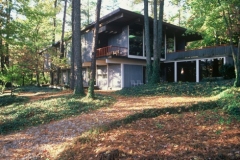 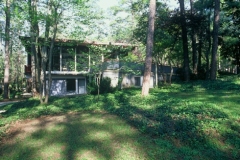 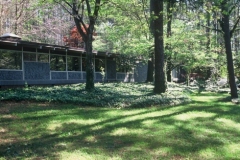 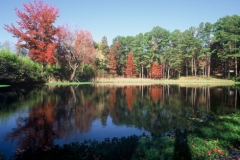 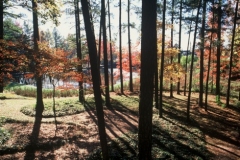 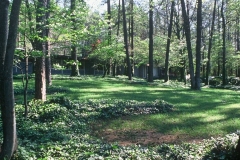 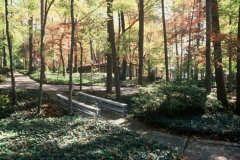 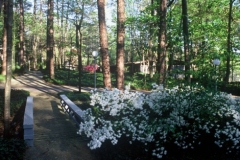 Gorgeous! I do hope they manage to preserve the trees and the landscape.

The water garden was one of the best examples of sympathetic land use in the south. We may mourn it’s passing but hopefully carry on it’s vision.

Tom Kundig’s architecture is about connecting art and physics, linking inside with outside, and placing small houses in big,...