Almost two years ago, Josh McCullar of SMBW Architects in Richmond, Va. established an online design magazine called vaMODERN.  It’s aimed at establishing a showcase for contemporary art and architecture in Virgina and the surrounding region, an area known more for its neo-Georgian and Colonial designs than for its glass boxes or modern art.  That’s been changing for some time now, and vaMODERN is here to document the transition.  We interviewed McCullar via email recently, and we’re pleased to post the results here:

When was vaMODERN started, and why?

It was conceived in January 2011 because I was searching for modern designers in Virginia and couldn’t find them easily online.  It was truly unplanned and spontaneous one late winter’s night in my home studio. In the South, Virginia has not been known for contemporary architects in the way North Carolina has been. I realized there wasn’t a “go-to” site for this information, so I made a list just for my own research and then realized it ought to be shared with a larger audience. I wanted to find a way to show that Virginia is not the old-school traditional place people think it is. We are beyond red brick and white trim. The name Virginia Modern is meant to evoke some irony.

Currently Katie Clinton and I are the writers and make all selections as to what will appear on the blog. But anyone can contribute content by contacting us at mail@virginia-modern.com. We are very interested in sharing the best creative work be it architecture, art, media, or craft being made right here in the region.

I didn’t if know anyone would read it,  but once I hit the “publish” button on WordPress it went out across the world. Within days I had hits from every inhabited continent on the globe. I was shocked! While most are in North America and on the East Coast, I’ve had several from Iran, Russia, and Romania of all places. It’s been fun to track the readers and I’ve gotten some interesting inquires. The coolest was a lady from California who lived in a 1940s Neutra house and was building a Luis Barragan inspired vacation home in western Mexico. She was moving to Richmond for a job, having never experienced the East Coast and was petrified about living in a red brick colonial. She ended up moving to London instead, but I became a sounding board for her in Virginia for a few weeks. I spoke with the guy who interviewed her for the job, and he insists he will convince her to finally come here. I’m waiting.

What do you intend to accomplish with it?

It has two elements: there is a growing list (from my original list) along the right hand side of the site with links to modern resources, and then there are in depth interviews and stories featured. There is no set plan. It’s like a child. It will evolve the way it wants to naturally. It is a forum for all members of the creative community in our region (Northern NC to Southern MD) to showcase their own work. I hope people will continue to contact us, and we welcome suggestions.

How do you describe its voice?

I hope the voice is of those whose work we feature. The interview format is the most common way content is shown. I like that very much because the voice changes with each piece and I’m fine with that.

What are the challenges involved?

The site has grown on its own course organically. It’s been very steady, but in the past 6 months readership has really increased. As you know, the key to building an audience and keeping them engaged is to curate truly unique content. I am always thinking about the next feature and seeking those who want to share their work. Long-term, I would like to selectively feature sponsor’s logos on the page, but now it is continuing to be maintained without any external financial support. Interested sponsors may contact us through the site. So the challenge of funding has concerned me somewhat, but I am confident the site will continue indefinitely because I believe we have made something of importance to Virginia and there is a sense of purpose in doing this.

It is not California modern, or New York modern, or International Style European Modern. That wouldn’t last fifty years here. So what is Virginia Modern? Not unlike Carolina Modern, I think modernism in this region should not ignore the past. We are not about white boxes. We are rooted in this place whether we know it or not. So, architecturally, modernism here is a continuation of the vernacular lineage of this place. It is about authenticity. Modernism here understands that Virginia’s climate is not the same as Southern California or Spain. Modernism here needs to shed water and insulate against snowfall and winter wind, while admitting warming sunlight. So, we may need gable roofs and eaves and that’s okay. It needs to shade in the summer, but be open to breezes to diffuse humidity. It needs to be open and transparent, but use materials like masonry and wood which are made of this land and age as gracefully has our vernacular has. The modern architecture we make today in Virginia should, centuries from now, evoke the same sense of permanence and visual power as the ruins of Barboursville, Rosewell, or Menokin do today. There are a small handful of good designers in Virginia who are doing this in their work, so vaMODERN showcases this, and that’s what we try to do in our own work.

For more information, go to http://virginiamodern.wordpress.com/ 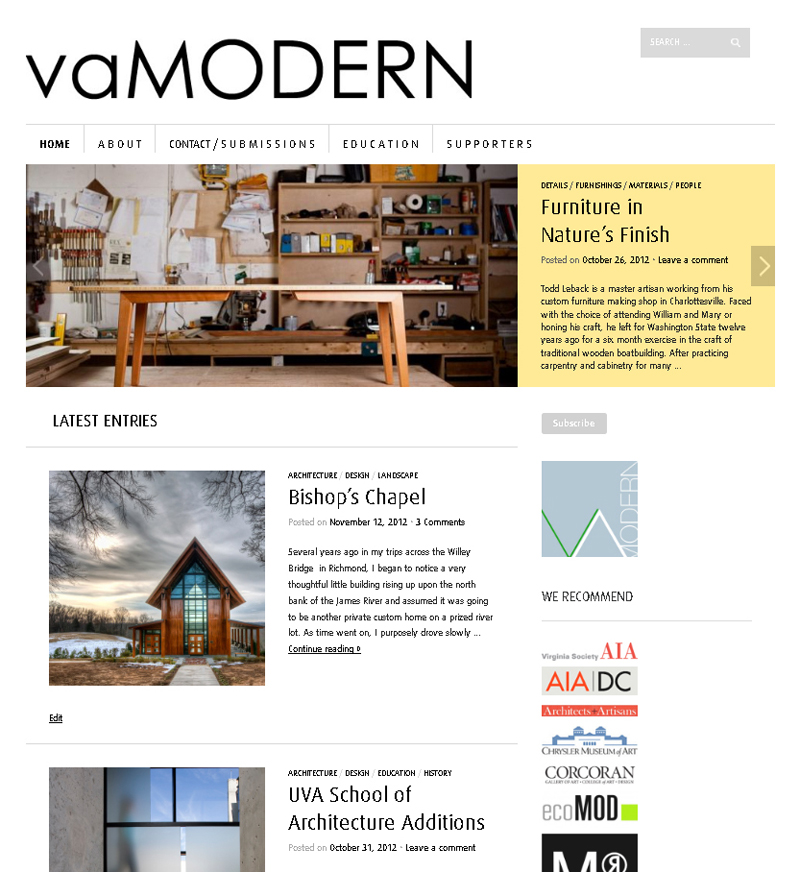 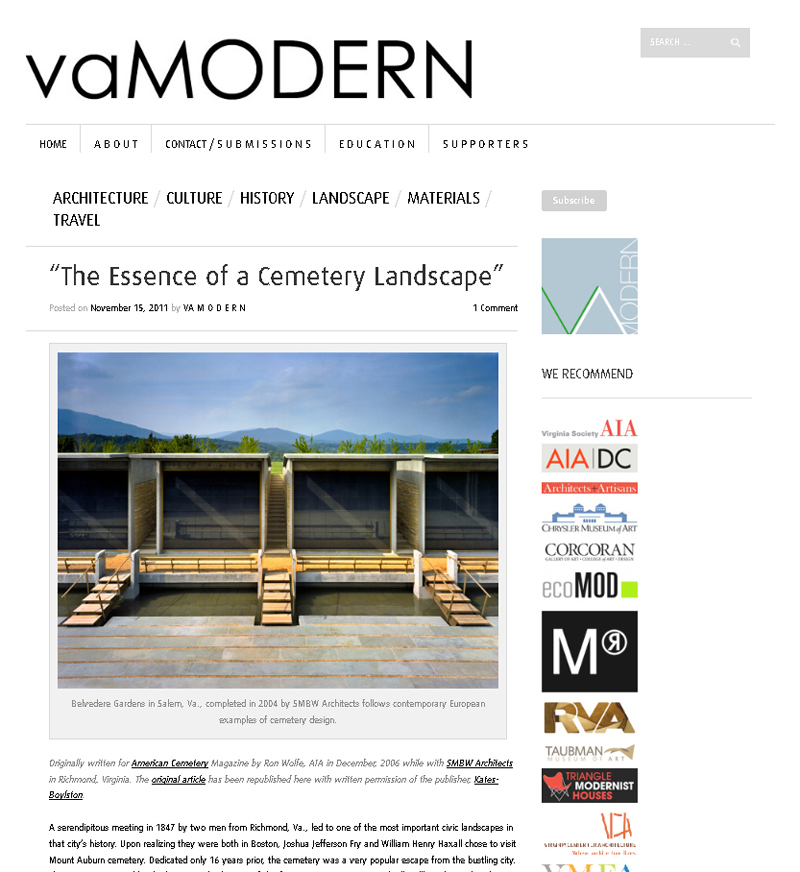 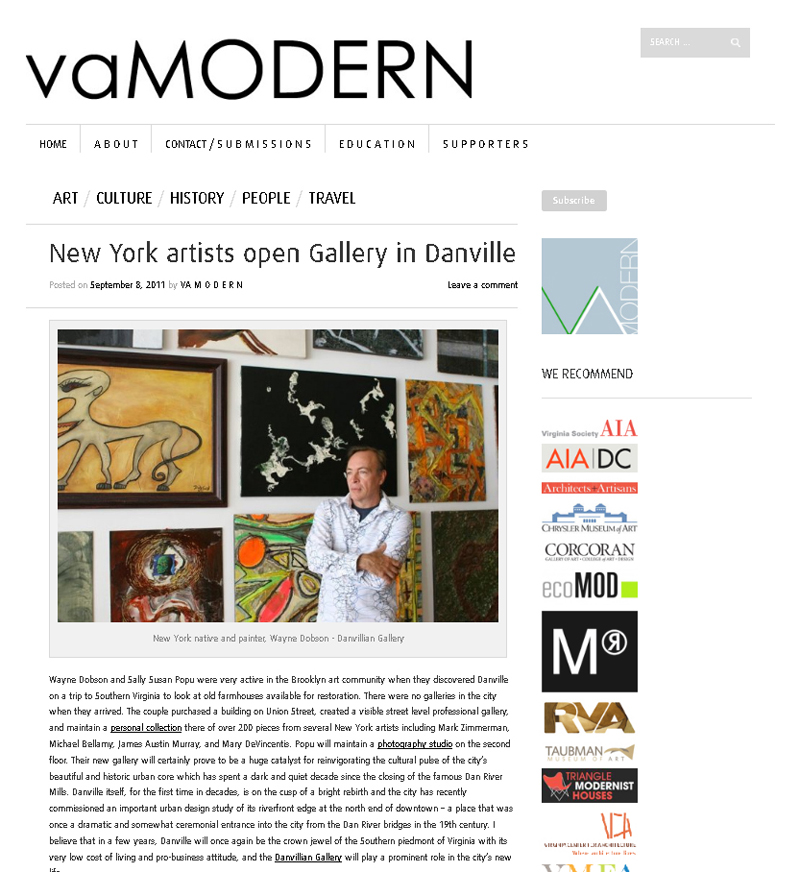 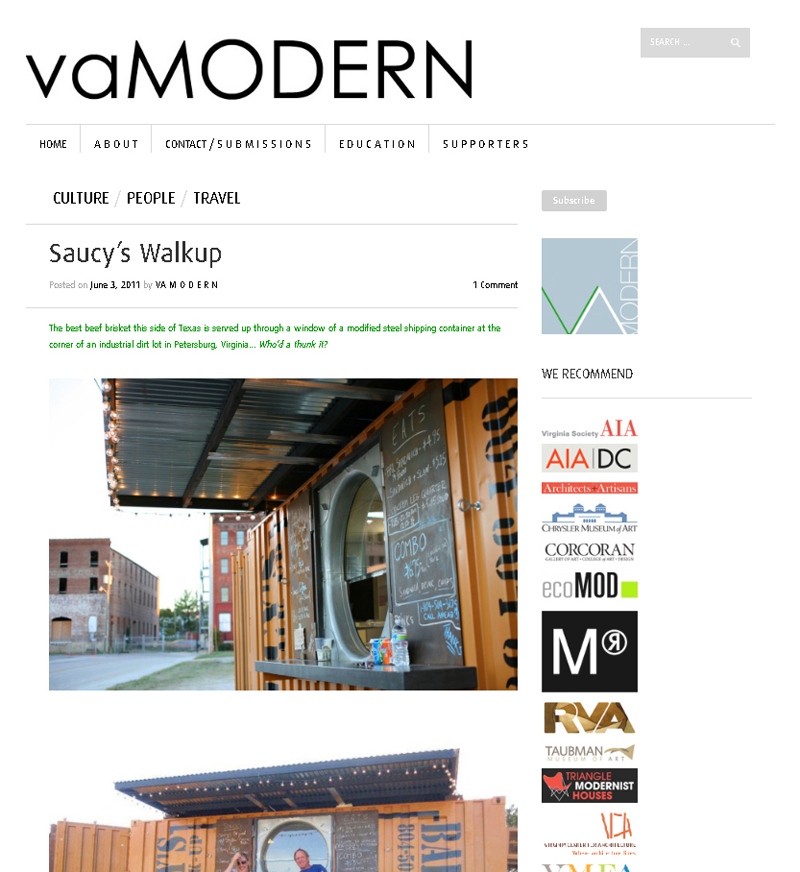 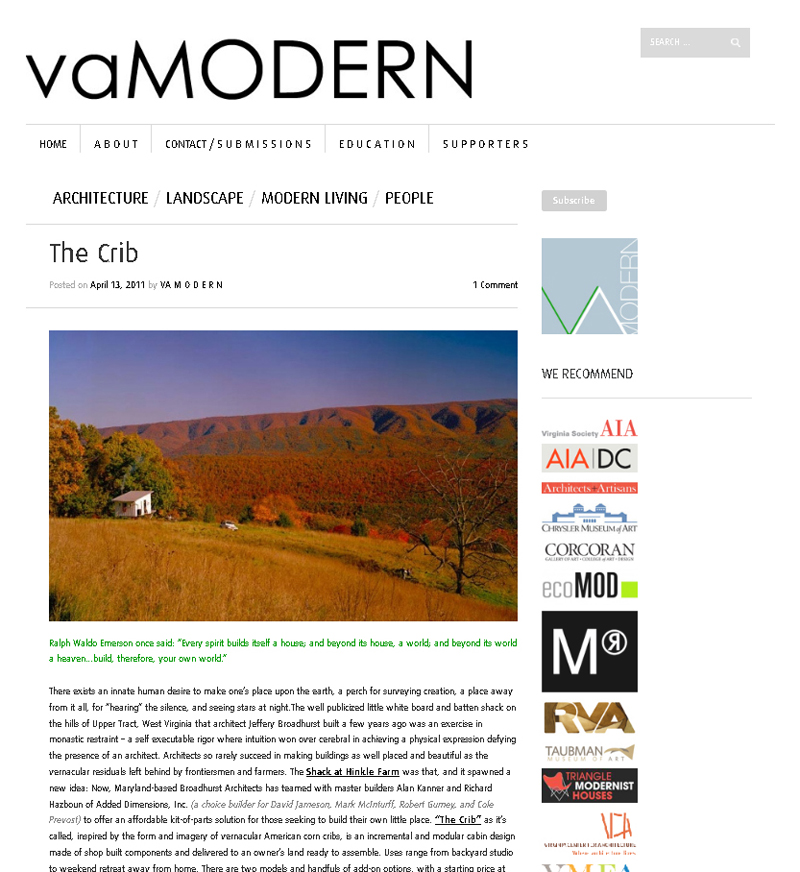 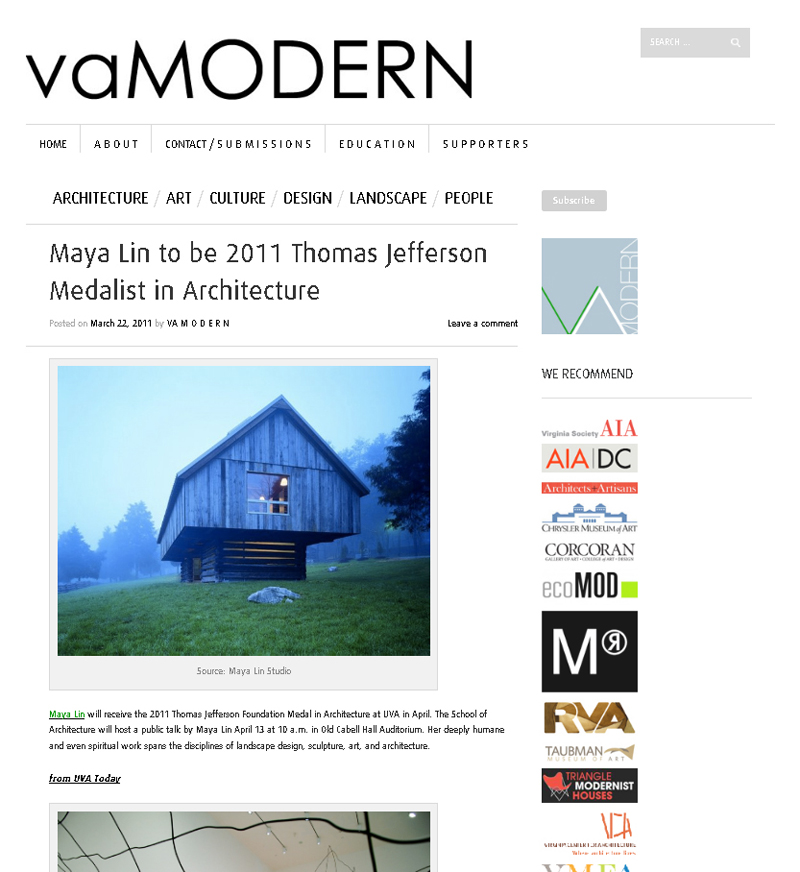 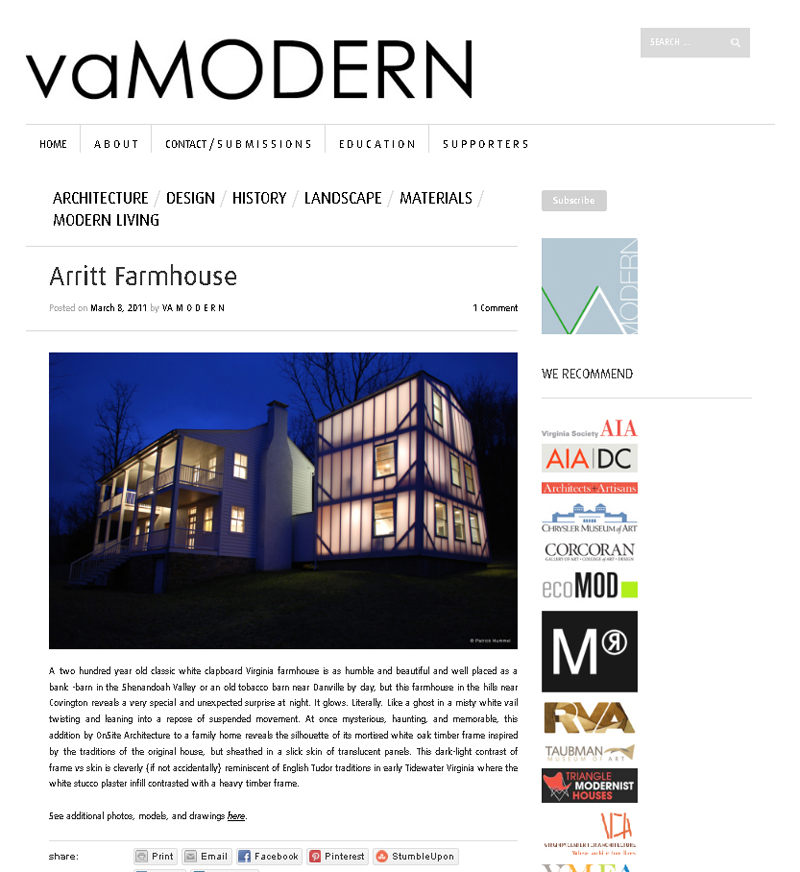 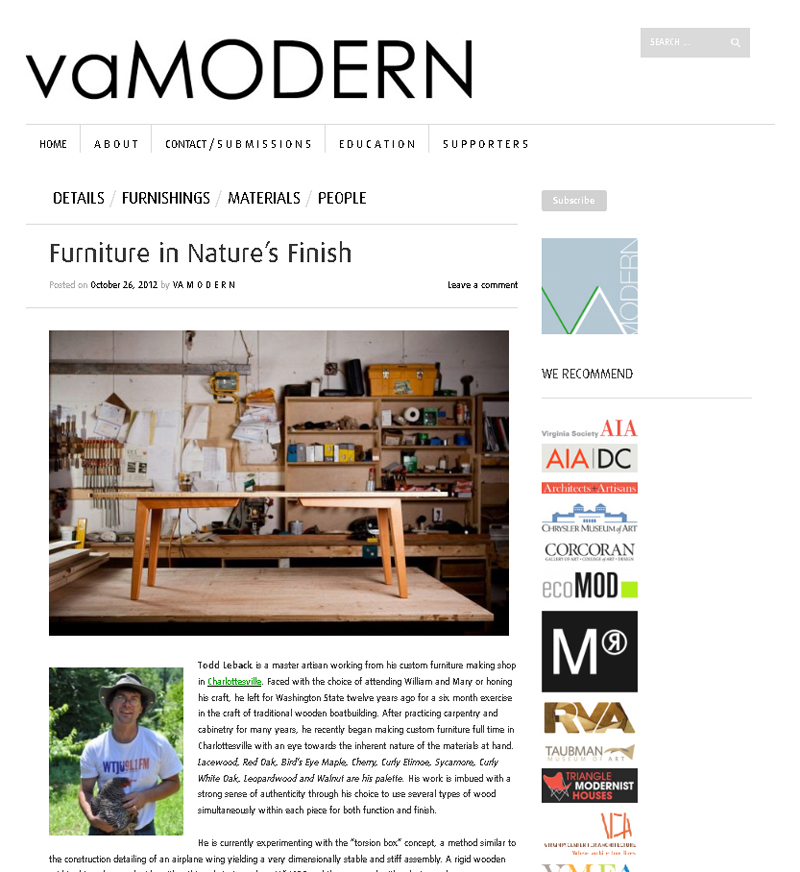 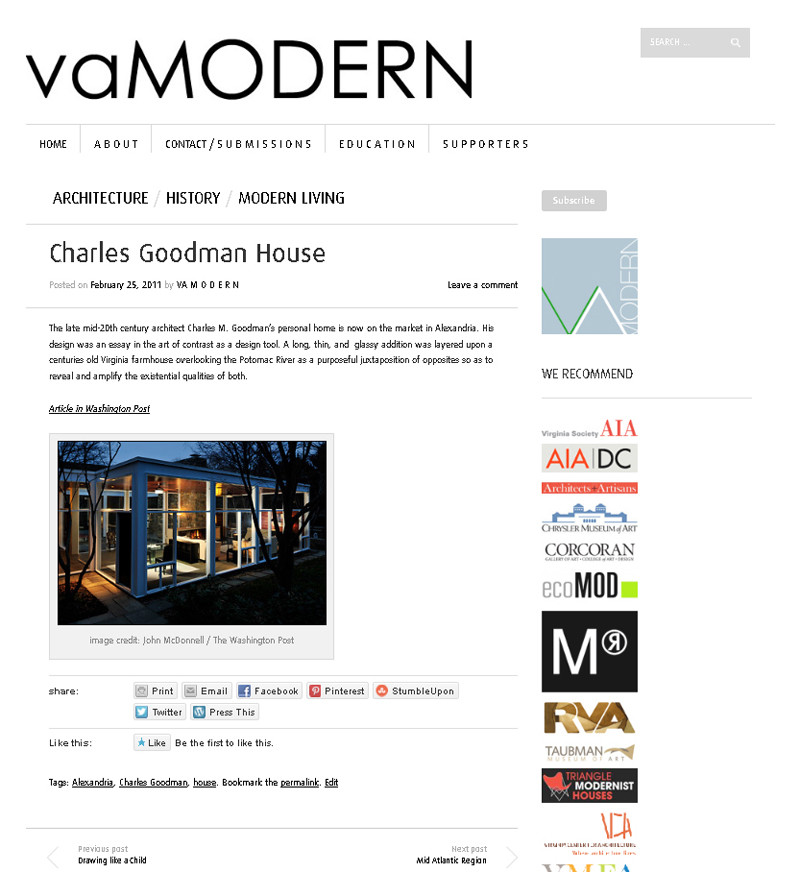 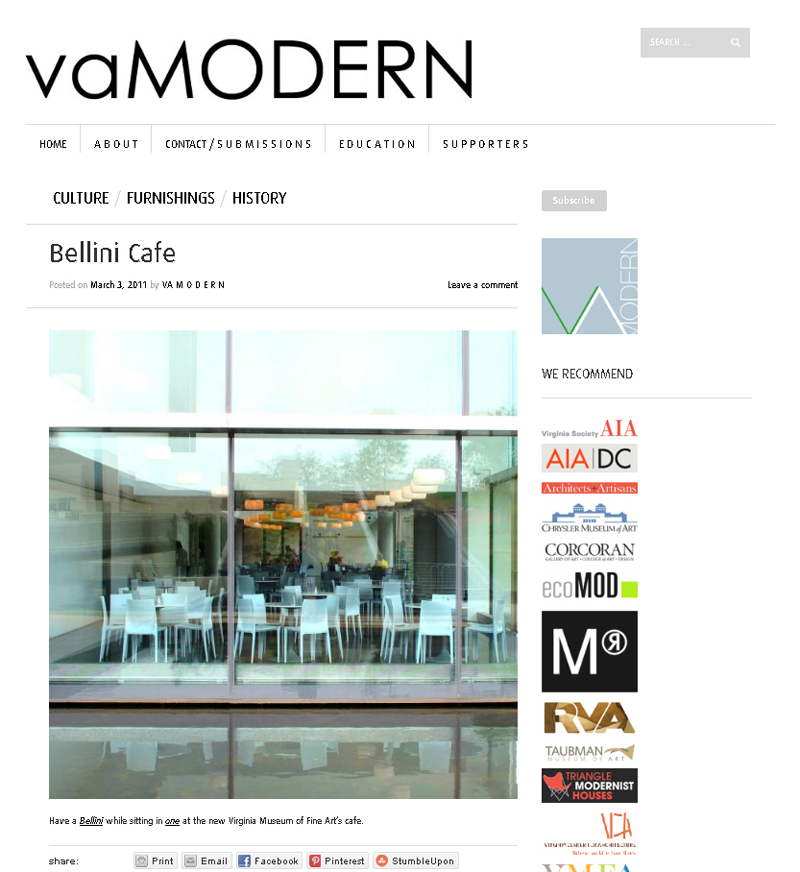 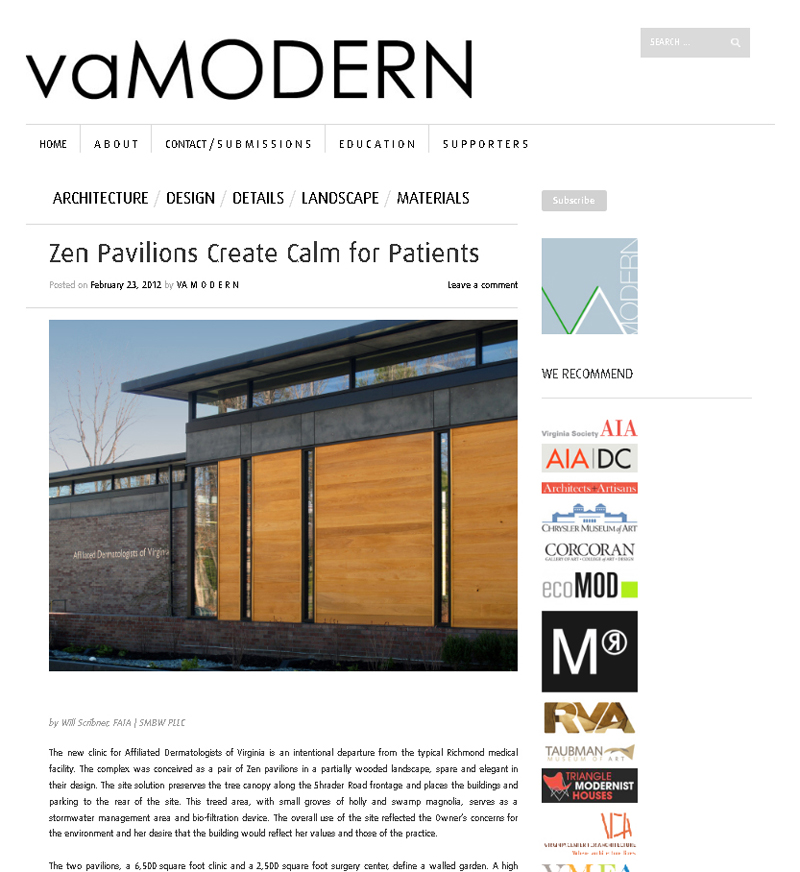 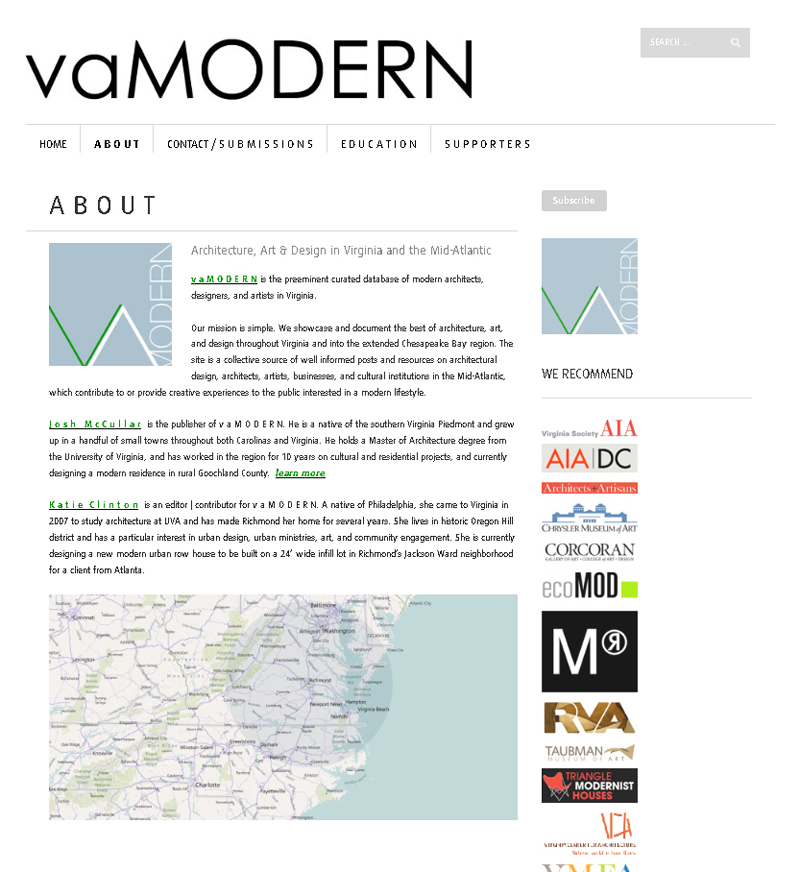 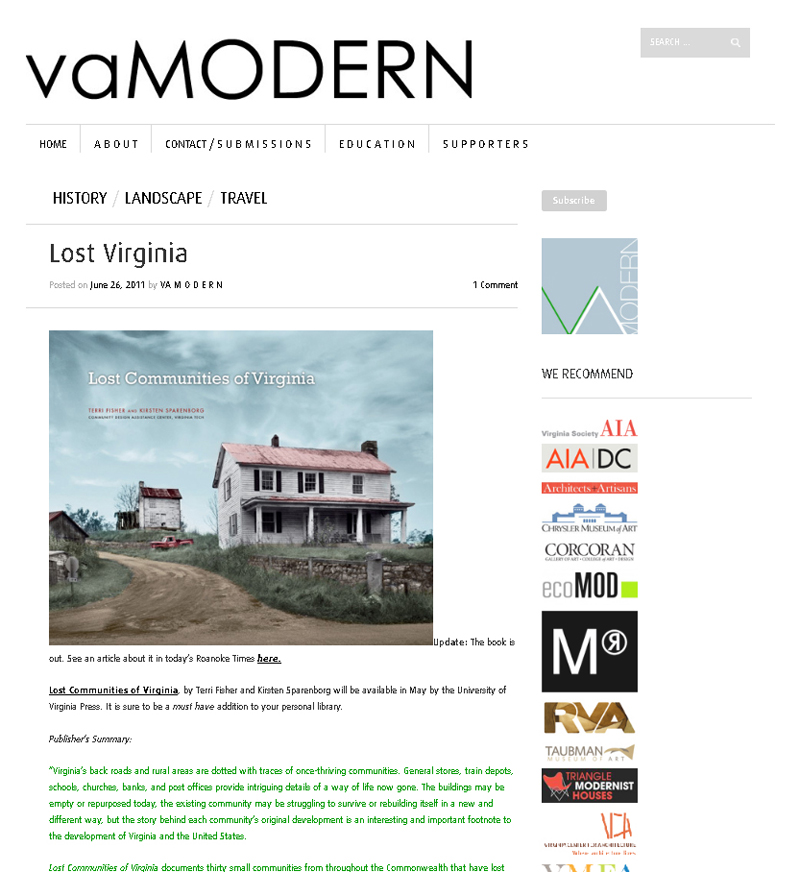 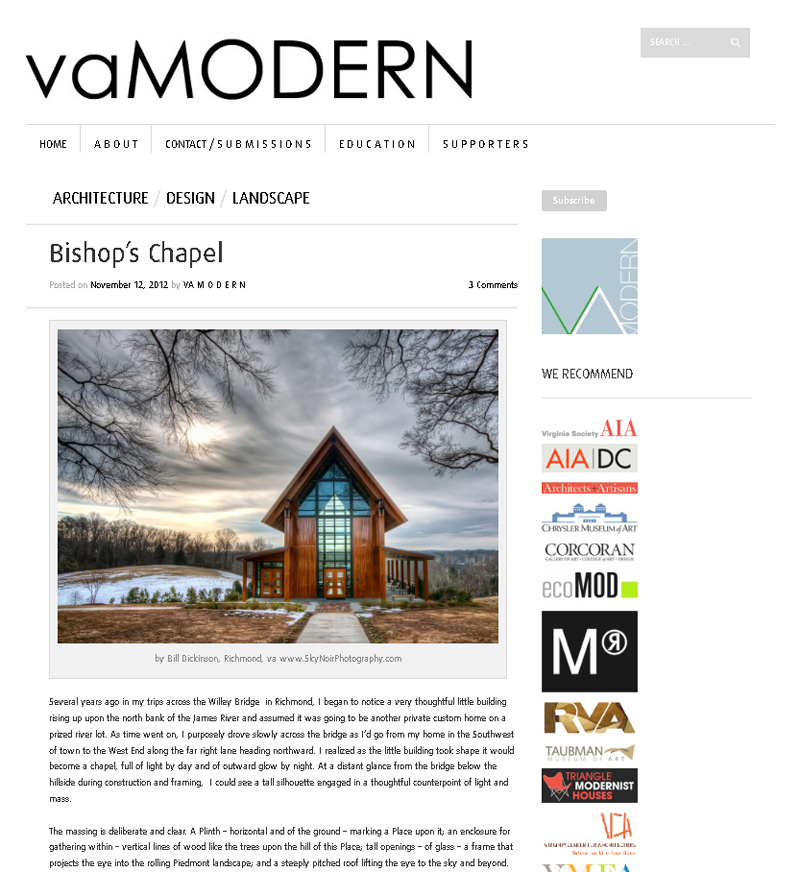 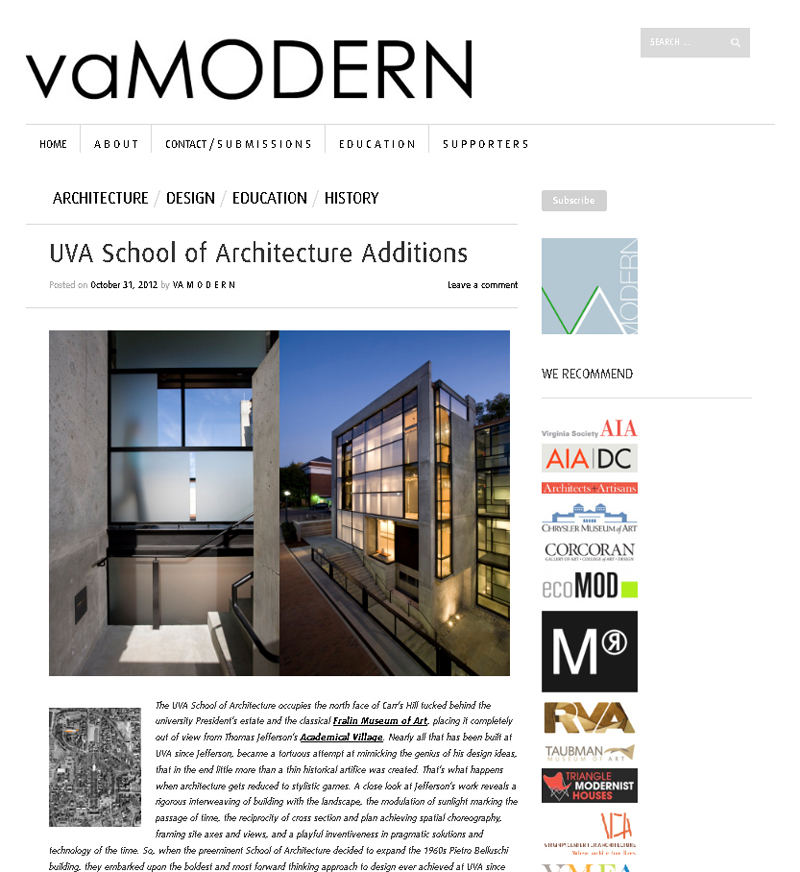 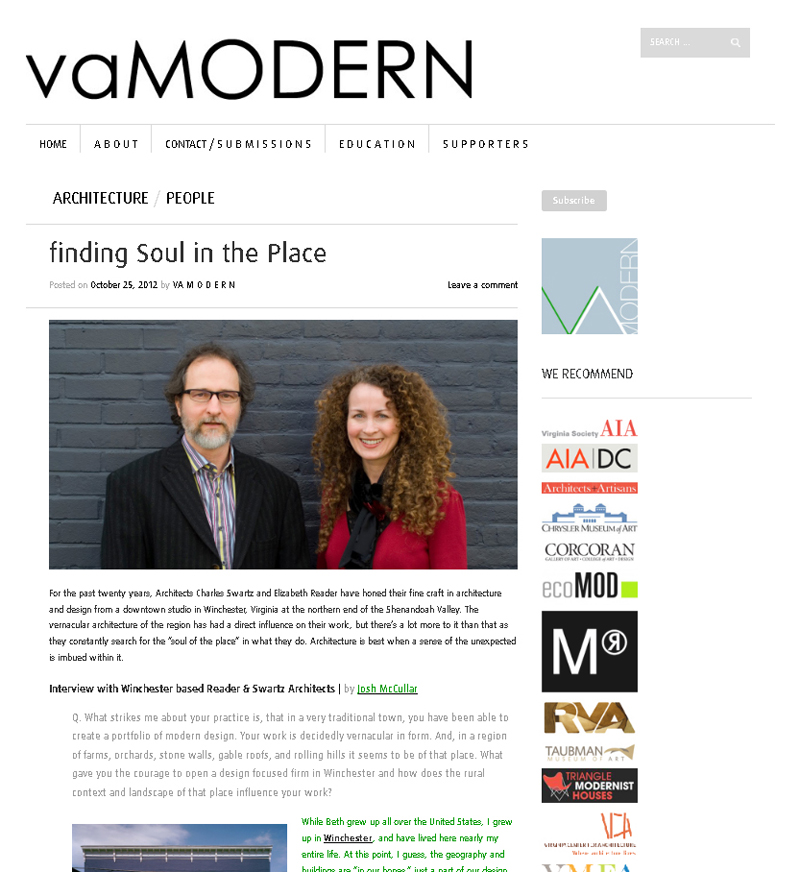 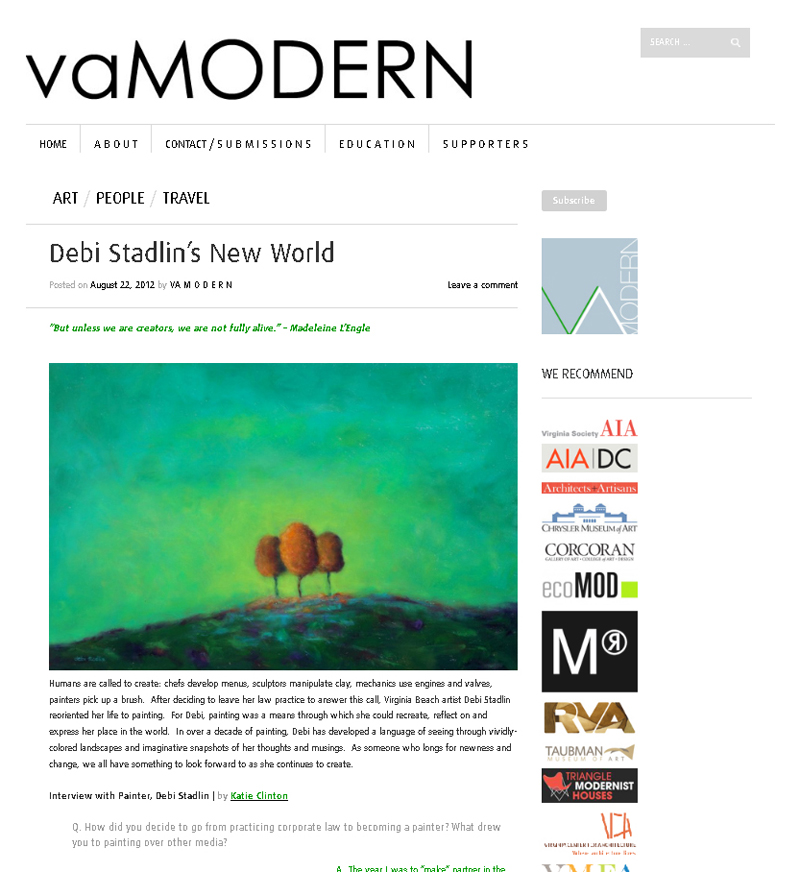 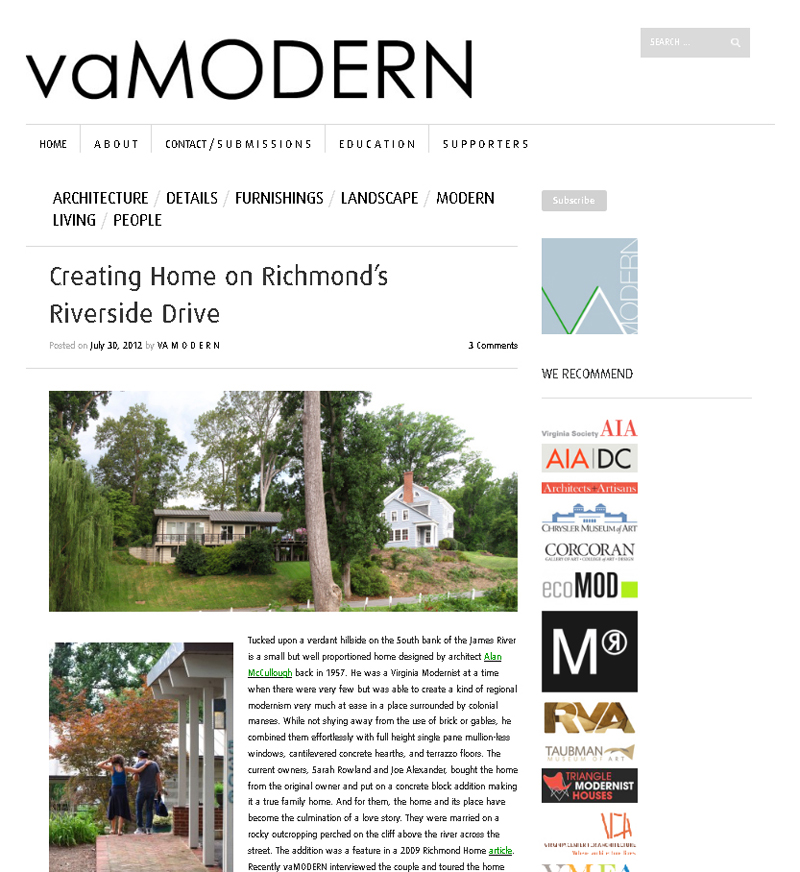 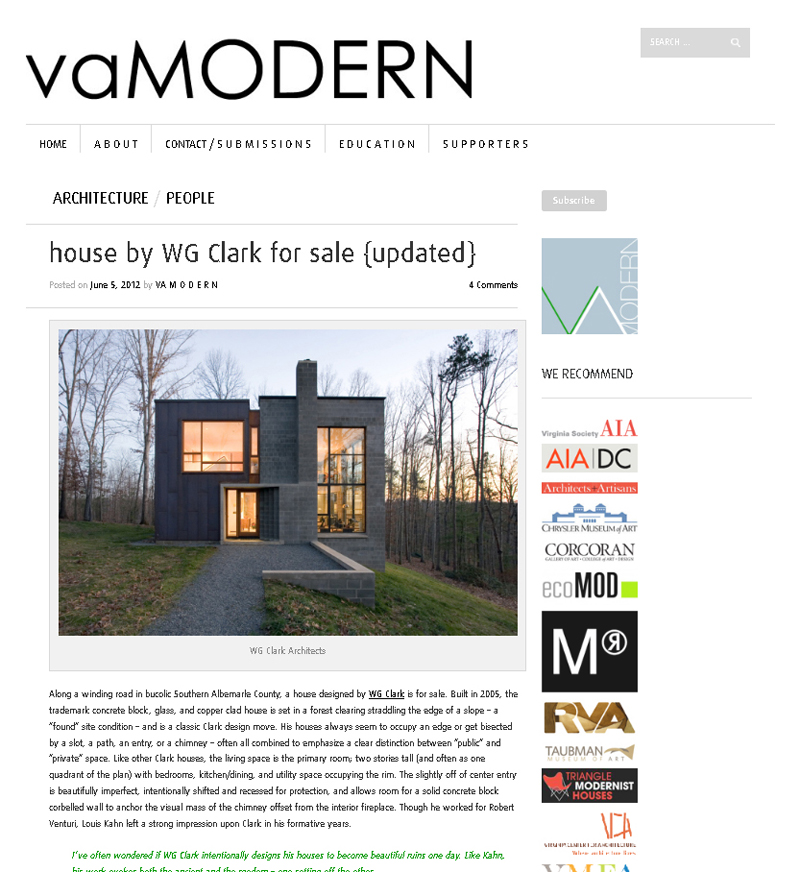 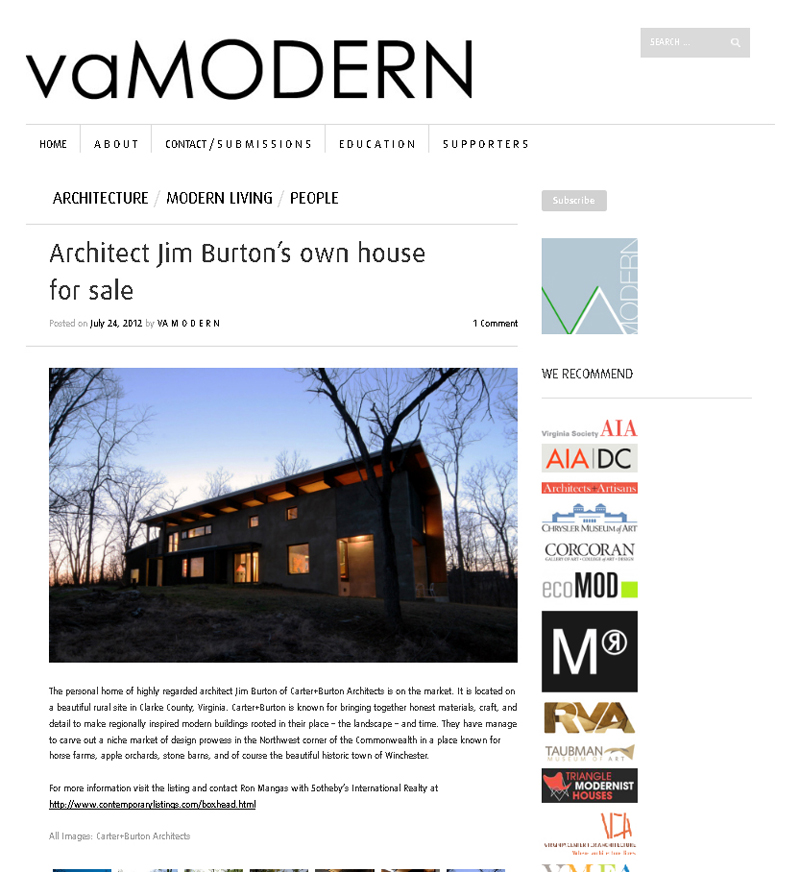 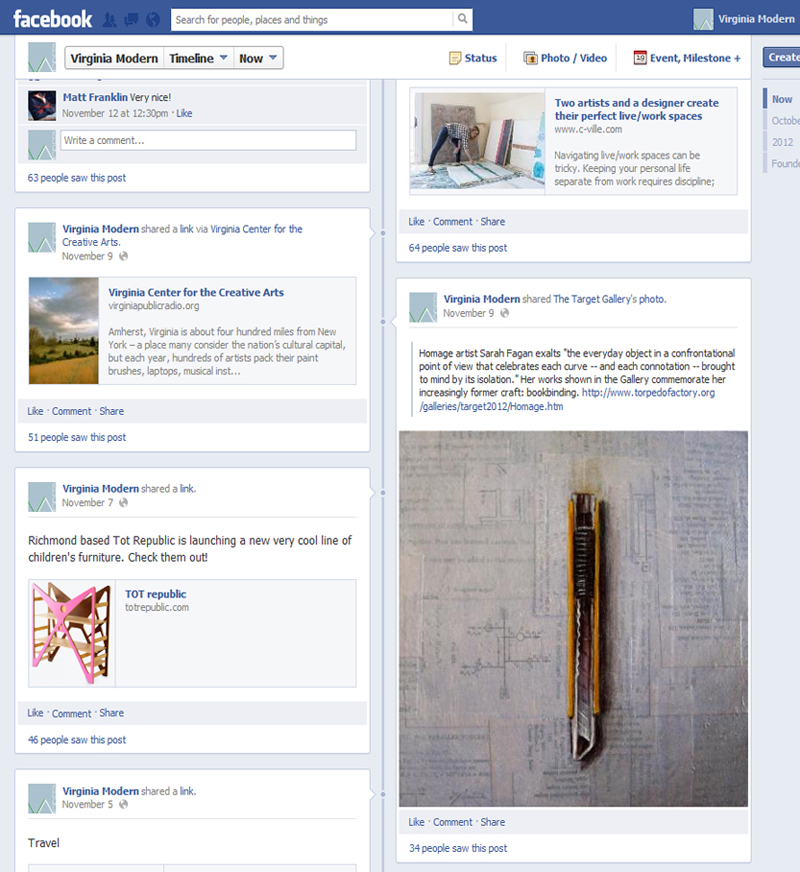 […] Check out the latest from write, J. Michael Welton. vaMODERN has been featured in his widely read journal Architect+Artisans. […]

De-Spec is a design studio founded in 2002 by Tom Shea and Farnaz Mansuri. The pair says the firm is dedicated to the concept...