Peter Ruggiero, design partner in the Chicago office of Skidmore Owings & Merrill LLP (SOM), is a product of big cities and canyon walls.

He grew up in New York.

His newest project, the 59-story, mixed-use  Rolex Tower in Dubai, demonstrates an understanding of urban streetscapes and how one building can respond to its neighbors to frame a civil conversation.

“Sheik Zayed Road is a collection of trophies that are kind of rude to each other,” he said.  “It’s architecture with a capital ‘A.’  So I wanted to make a really modest building, a good, classic, modern building – an elegant column of glass.”

To either side of the Rolex Tower are a couple of fairly extravagant structures that shout at all levels.  “The last thing we needed was another peacock competing for attention,” he said.  “So we decided to do a very, very quiet building – one that respects the street.”

It’s the second tower to be completed by SOM on Sheik Zayed Road this year, but this one’s a little smaller than Burj Khalifa, the world’s tallest building.  The Rolex tower is 30 floors of office space, with 25 floors of residential apartments atop, capped off by two residential penthouses.  Each floor is from 11,000 to 12,000 square feet.

Its structural system rests on two cores of reinforced concrete, one for office floors and the other for residential, one east and the other west.  “There were no views on either side – they’re all north and south,” the architect said.  “So this gives you a fairly good layout for the residents.”

Its sheathing is a curtain of tempered glass with a ceramic coating fired onto it like pottery.  Its pattern is dense near ground level, then lighter as the building ascends into the desert sky.  The effect is to emphasize the structure’s verticality, and to give it a glow, especially on its south side in early morning and late afternoon.

“We chose the color of the glass to allow it to do what it likes to do – emit light like a big sundial,” the architect said.  “Its color has to do with the time of day.  It’s a shimmering mirage, like an image of the desert.” 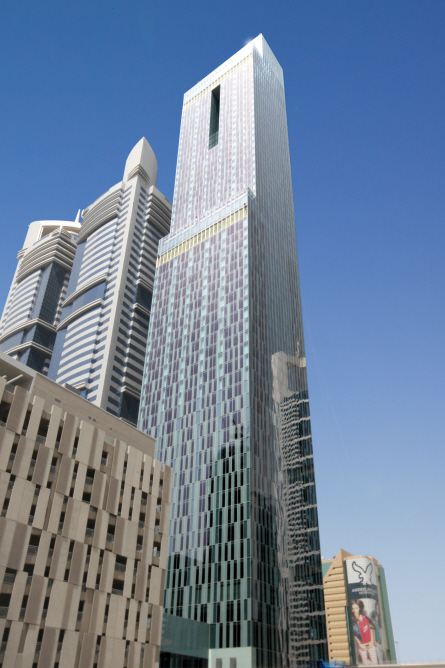 A Shimmering Mirage in Dubai | Architects and Artisans - UAE Blog

Landscape architect Chris Counts has cast an ambitious and imaginative eye upon the Forum in Rome. A visiting professor...