She started with a tiny torso that a jeweler might use to display precious gems.  She added carved Styrofoam, then fiberglass mesh and a skim coat of Thinset.

Then came the marble flecked with golden yellows, followed by the Carrara and the refined and precious smalti from Orsoni in Italy.

Not to mention the tiny sea spines.  She used thousands of them, known also as dentalia in Latin, since they’re actually the hollow tusks of miniscule sea creatures.  Once used as money by Native Americans, they’re still incorporated into their beadwork today, as necklaces, chokers and earrings.

But Julie applied them with tweezers – about six pounds of the smooth little teeth weighing less than an eighth of an ounce each – to create a ruffle for her mosaic skirt that adorns the work she calls La Corrente, or the current.

It’s named for the swirling movement of the 24-karat green and copper and gold sea grass sweeping across the sculpture.

“It gradates from dark at the bottom to lighter at the top,” she says.  “It’s like the seabed, with the white gold lines, and the current that moves the sea kelp around.”

She took her inspiration from the Gulf of Mexico.  Not only is it threatened deep water drilling and hurricanes but also by another natural phenomenon.

“The Gulf is in jeopardy,” she says.  “The sea life there is threatened by giant sea kelp – a non-native species that’s arrived by way of ships from other seas.  So La Corrente is about the fragility of nature, and a call to preserve these natural habitats.”

The 29-inch tall, 22-inch wide sculpture weighing a total of 15 pounds rests now, appropriately enough, on a low bookshelf in the living room of a museum curator’s residence. 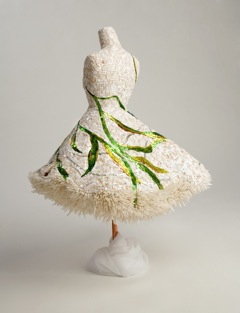 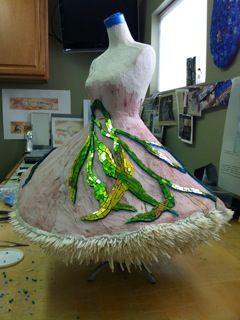 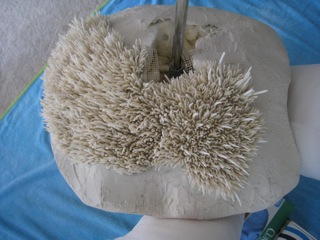 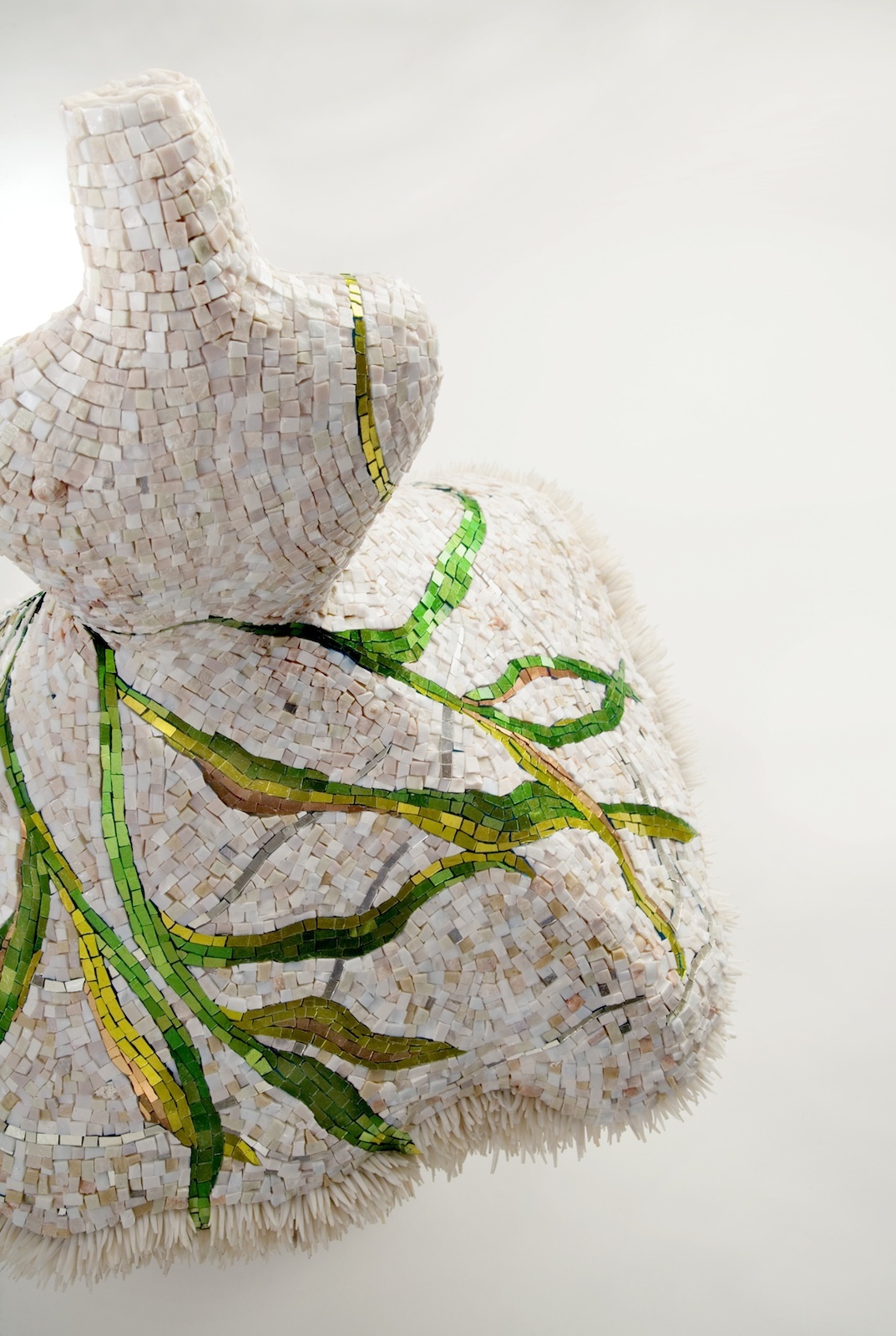 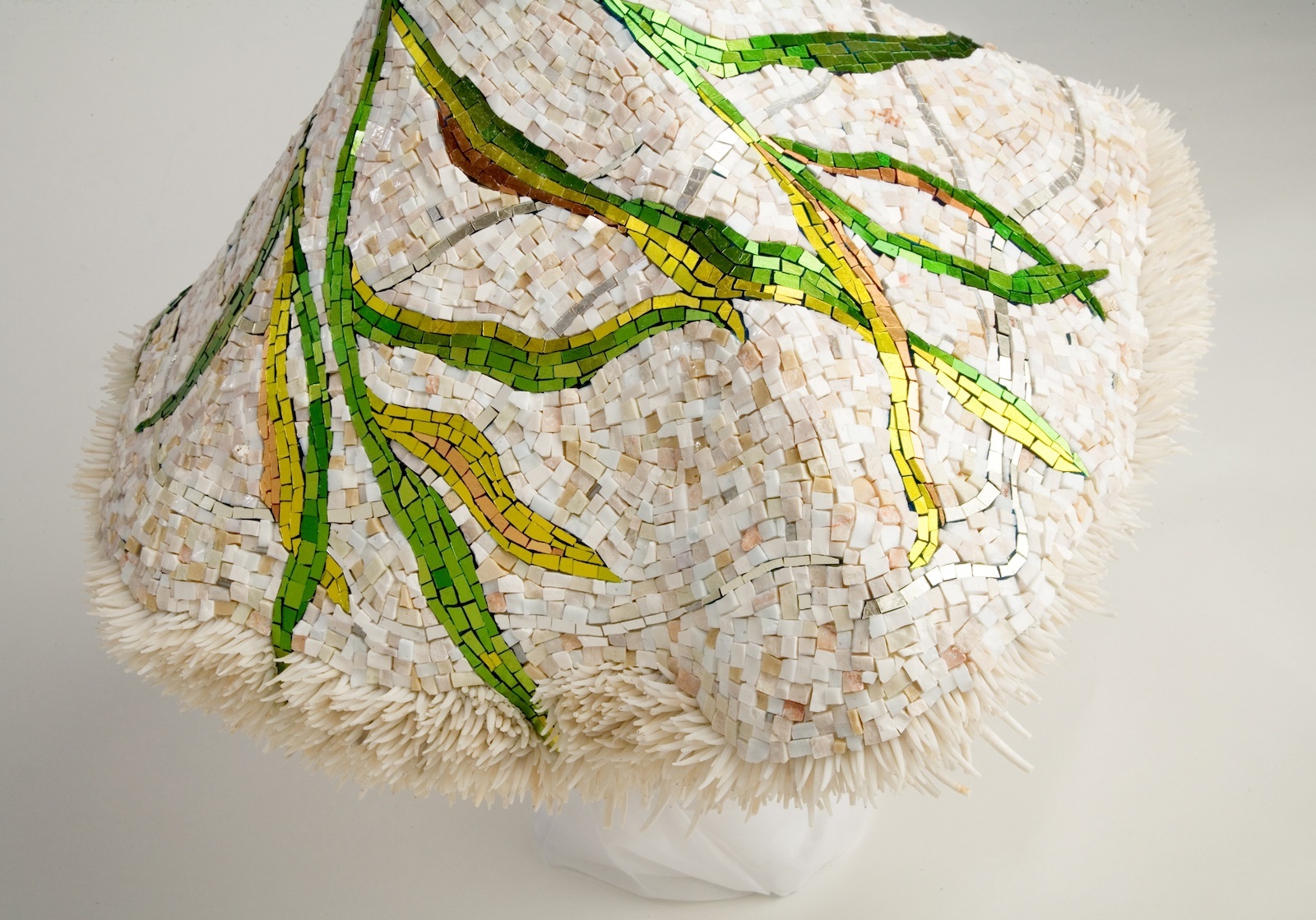 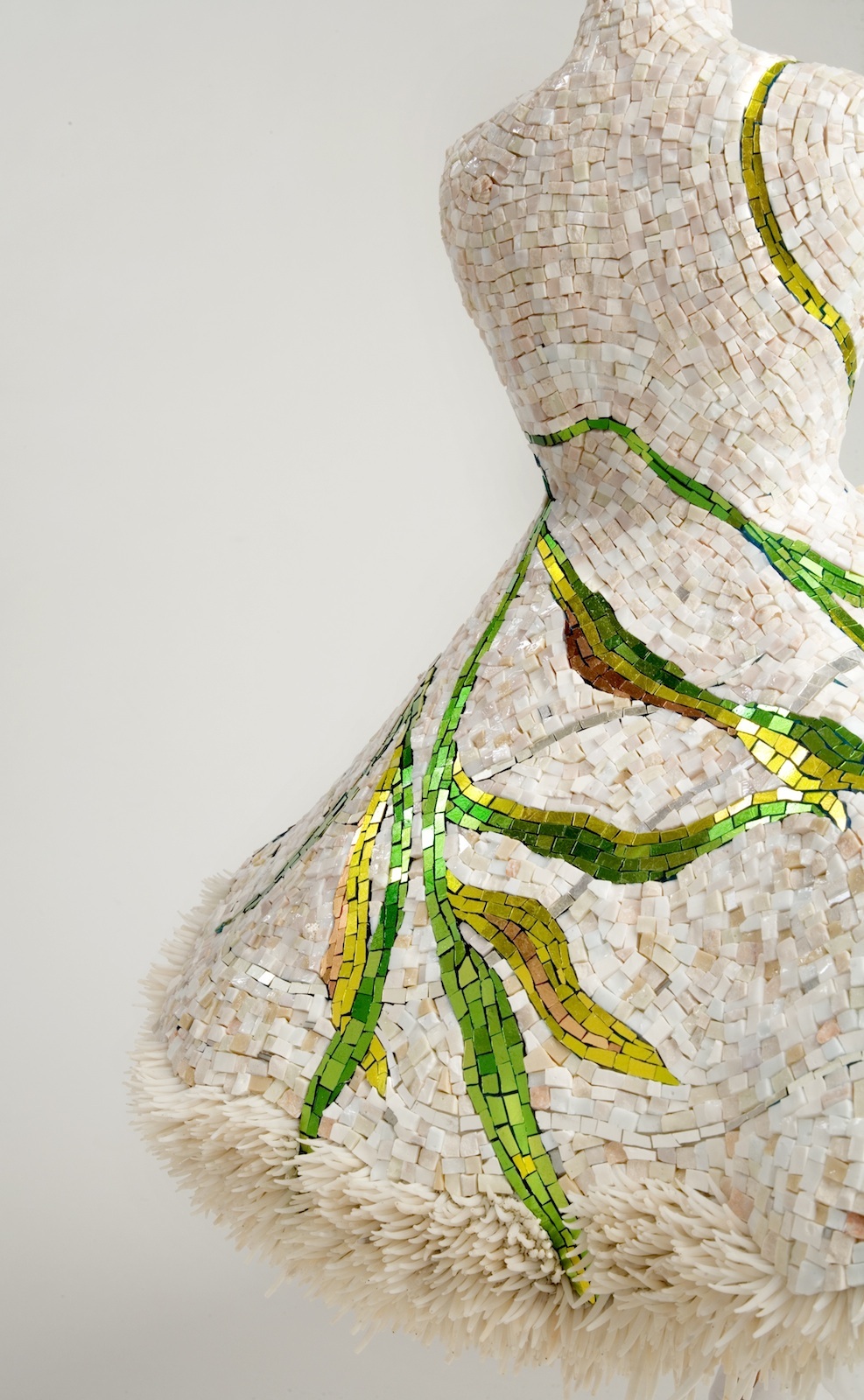 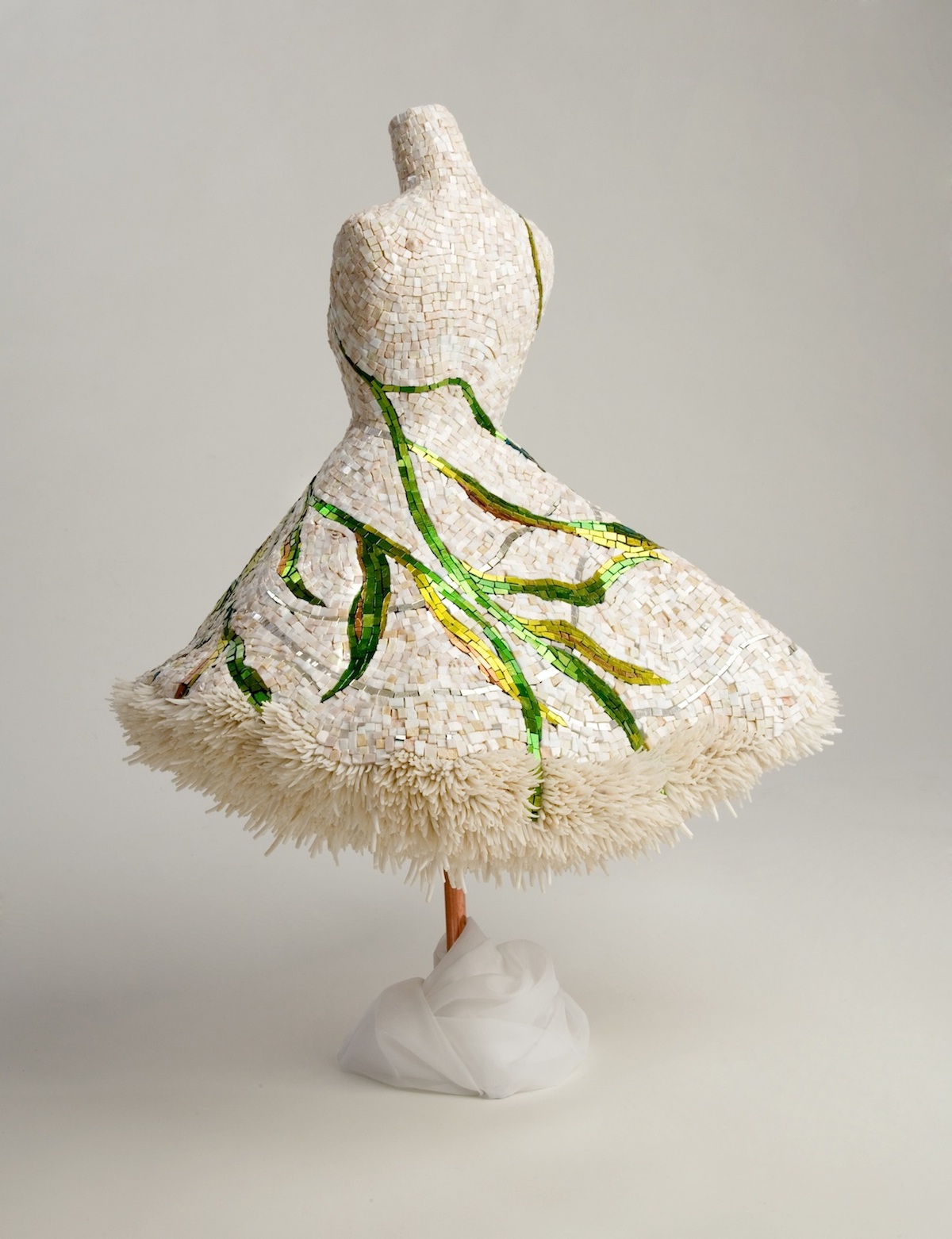 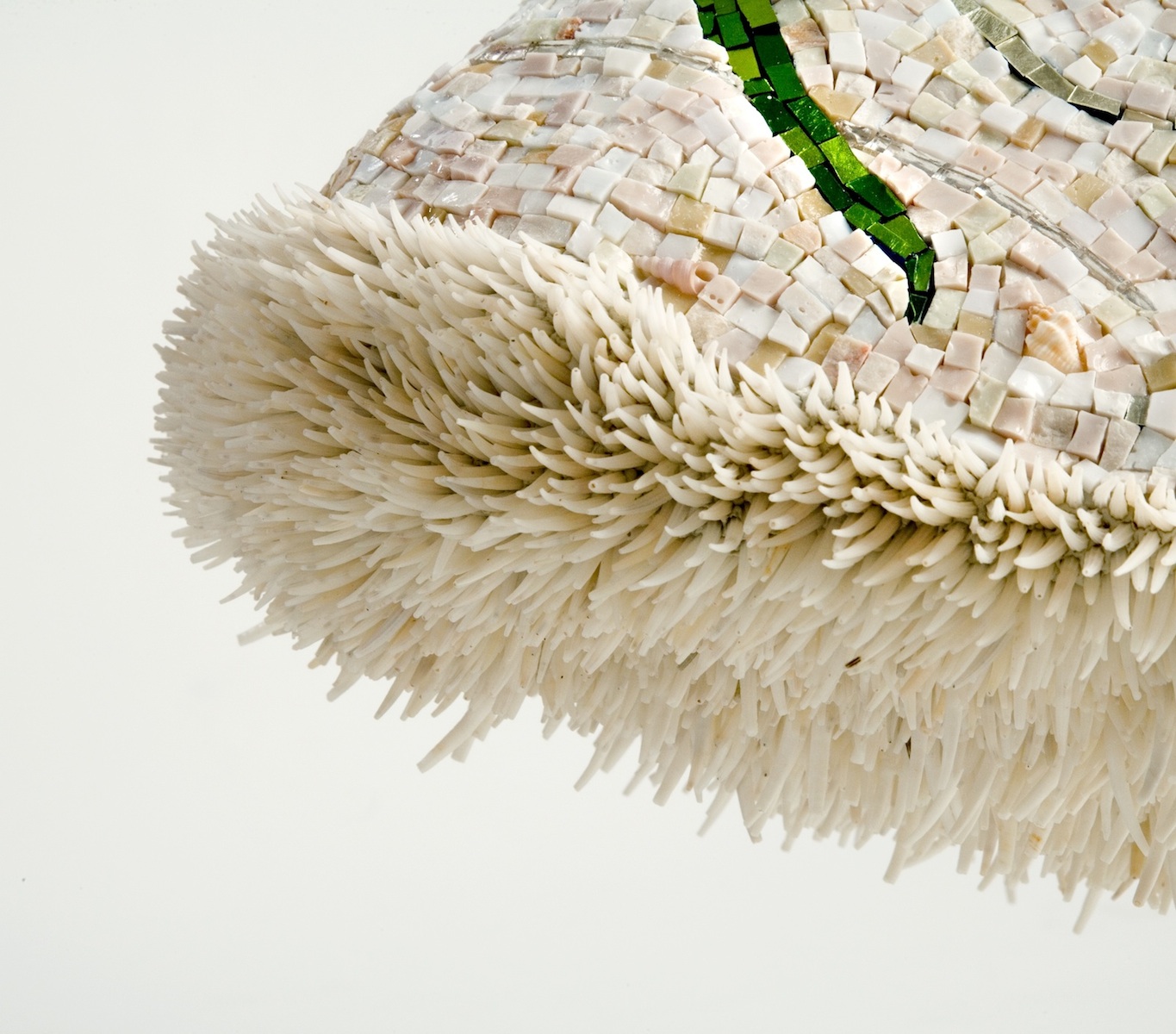 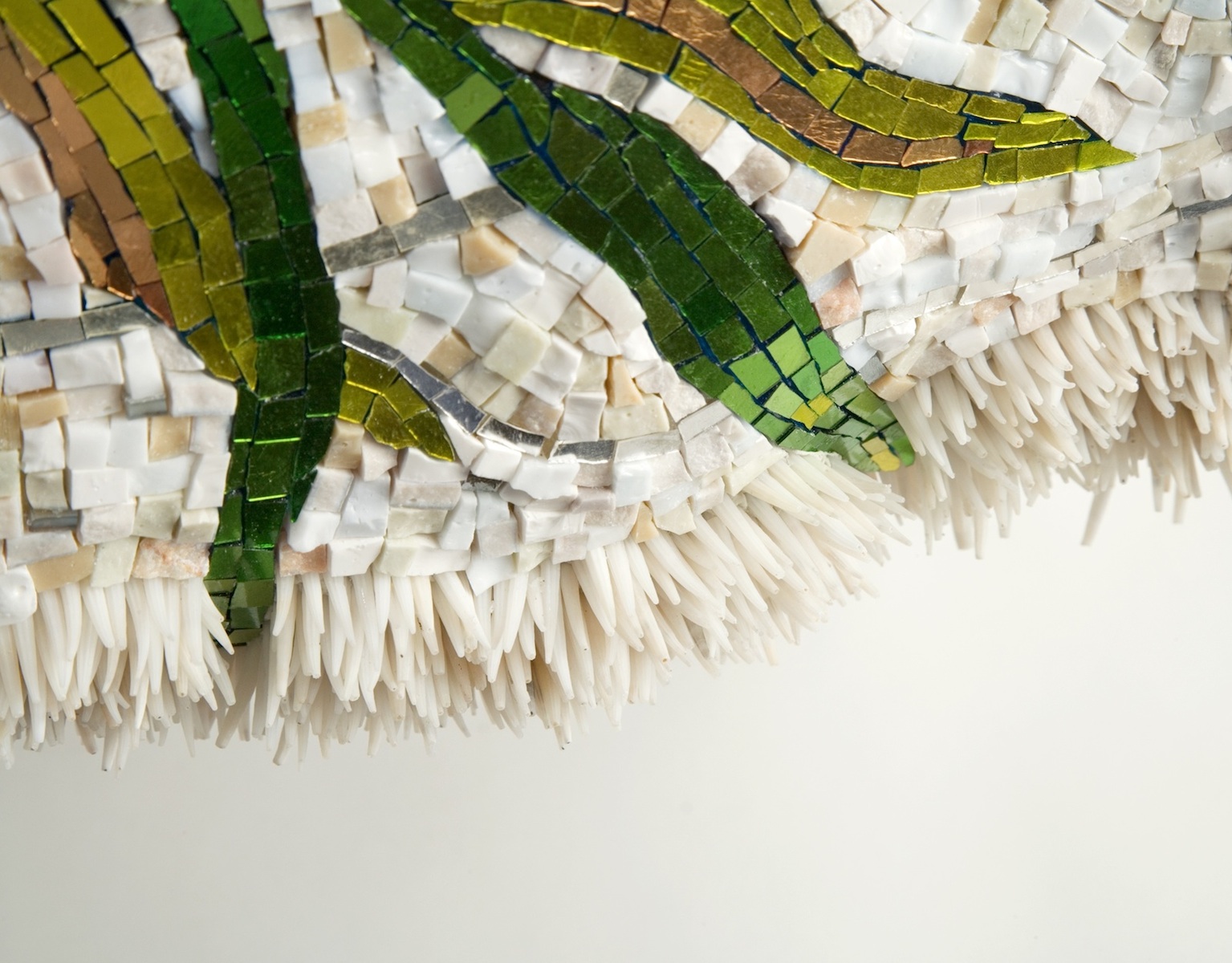 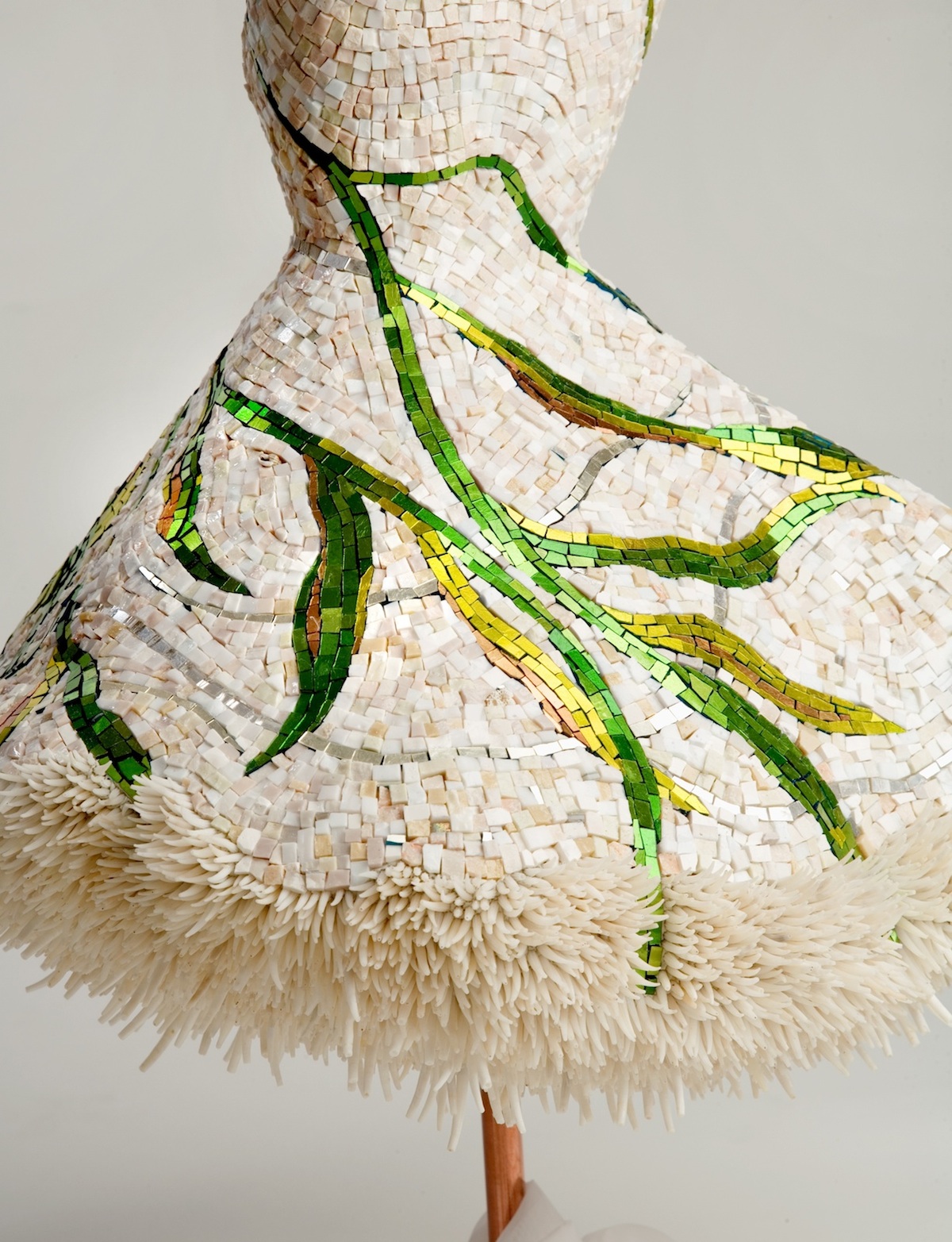 This piece is absolutely amazing in real life!

There are many mosaic artists who use mannequins as a starting point for their mosaics, often cladding them in rich patterns and textures.

What sets Richey’s work apart is her ability to create sculptural forms that make stone, glass, and shells appear to float and fold with the gentle grace that only wind and water can bestow. It has been such a pleasure to watch this work evolve.

This is so beautiful and graceful. I love the way the skirt seems to be in motion.

The area around the hemline is so interesting to me. I mean the hemline of the art with the dentalia and all.

Absolutely gorgeous: swishing like a gown at the same time that is swirls like the sea. It is wonderful to know that in our speeding world there is still an artist working slowly and patiently to create a work of art that can only come from prolonged attention and skill.

Thank you my dear artist friend! This is a joy for the senses!

Thanks, everyone. I was thrilled to get these photos – always wonderful to see it portrayed in a “beauty shot.” For that, I thank my very talented photographer, Stacy. http://www.stacybrattonphotography.com The woman can shoot.

It’s so beautiful! I hope to see it in person in Austin.

Tweets that mention A Mosaic in Three Dimensions | Architects and Artisans -- Topsy.com

The grace of flow and buoyancy certainly mask any sense of the “excruciating months” devoted to this beautiful piece. Brava, Julie. And thanks for eloquently bringing it to our attention, Mike.

Even though the development and making of La Corrente was absolutely fascinating, the amazing result of this latest Richey masterpiece is truly quite dazzling! If possible Julie may have outdone herself again and I couldn’t be more thrilled!

The attention to detail with which Julie applies her mosaic art never ceases to amaze me. As one of your commentors mentioned, she stand apart from other mosaic designers through the use of effetively, 3D aspects. I just need to save up enough to get one of my own! 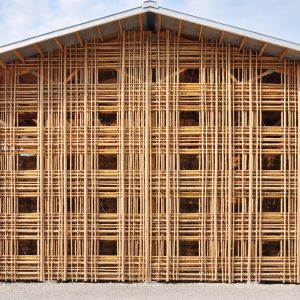